The Definition of Privilege is one of the writings of Adam Falkner who, according to me, is quite impressive. In this brief story, I love how he brings to light how much most white-dominant cultures (or any majority in a culture) never quite understand the perspective of being different.
Bravo Adam.

It’s time for all of us to stand up against bullying. It’s just not ok to sit idly by.

Shawn Achor’s talk is relevant in our lives in more than just the area of work. In almost all areas of our lives we have been trained not to notice our happiness.

I just saw this video of Andrew Solomon on a Ted Talks link and found it moving and quite meaningful. What a thinker! He has a way of making you think differently about love, diversity, acceptance, judgement and family. Please enjoy his talk.

Life doesn’t begin only after we finish, arrive, get, achieve or have something. Being stuck in traffic sometimes is part of the trip. Savor the journey. Wasting even one moment is a sad waste of time. Savor the moment.

I stumbled on this piece of wisdom from something written by Breneé Brown and found it quite important and helpful as a perspective setter:

These are anxious and fearful times, both of which breed scarcity. We’re afraid to lose what we love the most, and we hate that there are no guarantees. We think not being grateful and not feeling joy will make it hurt less. We think if we can beat vulnerability to the punch by imaging loss, we’ll suffer less. We’re wrong. There is one guarantee: If we’re not practicing gratitude and allowing ourselves to know joy, we are missing out on the two things that will actually sustain us during the inevitable hard times.

What I’m describing above is scarcity of safety and uncertainty. But there are other kinds of scarcity. My friend Lynne Twist has written an incredible book calledThe Soul of Money. In this book, Lynne addresses the myth of scarcity. She writes,

We’re not thin enough, we’re not smart enough, we’re not pretty enough or fit enough or educated or successful enough, or rich enough—ever. Before we even sit up in bed, before our feet touch the floor, we’re already inadequate, already behind, already losing, already lacking something. And by the time we go to bed at night, our minds race with a litany of what we didn’t get, or didn’t get done, that day. We go to sleep burdened by those thoughts and wake up to the reverie of lack … What begins as a simple expression of the hurried life, or even the challenged life, grows into the great justification for an unfulfilled life.2

As I read this passage, it makes total sense to me why we’re a nation hungry for more joy: Because we’re starving from a lack of gratitude. Lynne says that addressing scarcity doesn’t mean searching for abundance but rather choosing a mind-set of sufficiency:

We each have the choice in any setting to step back and let go of the mindset of scarcity. Once we let go of scarcity, we discover the surprising truth of sufficiency. By sufficiency, I don’t mean a quantity of anything. Sufficiency isn’t two steps up from poverty or one step short of abundance. It isn’t a measure of barely enough or more than enough. Sufficiency isn’t an amount at all. It is an experience, a context we generate, a declaration, a knowing that there is enough, and that we are enough.

Sufficiency resides inside of each of us, and we can call it forward. It is a consciousness, an attention, an intentional choosing of the way we think about our circumstances.3

Scarcity is also great fuel for the gremlins. In my earlier shame research and in this more recent research, I realized how many of us have bought into the idea that something has to be extraordinary if it’s going to bring us joy. In I Thought It Was Just Me, I write, “We seem to measure the value of people’s contributions (and sometimes their entire lives) by their level of public recognition. In other words, worth is measured by fame and fortune. Our culture is quick to dismiss quiet, ordinary, hardworking men and women. In many instances, we equate ordinary with boring or, even more dangerous, ordinary has become synonymous withmeaningless.”4

I think I learned the most about the value of ordinary from interviewing men and women who have experienced tremendous loss such as the loss of a child, violence, genocide, and trauma. The memories that they held most sacred were the ordinary, everyday moments. It was clear that their most precious memories were forged from a collection of ordinary moments, and their hope for others is that they would stop long enough to be grateful for those moments and the joy they bring. Author and spiritual leader Marianne Williamson says, “Joy is what happens to us when we allow ourselves to recognize how good things really are.”

“You teach people how to treat you by what you allow, what you stop and what you reinforce.”—Tony Gaskins

“Remember: Happiness is a way of travel, not a destination.”—Roy Goodman 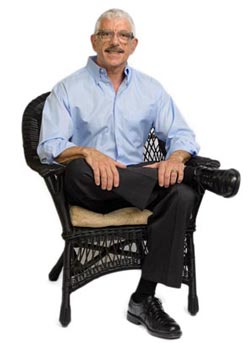